Since I was a child, I always wondered about the saying, “You can’t go home again.” In my case, being born across the sea, I thought it explained perfectly the remoteness of the possibility of my return visit. Luckily, my Fulbright experience in Nottingham brought me within two and a half hours (by car) to my birthplace in the U.K. That good fortune, combined with my husband’s loving gift of renting a car and driving us to England’s eastern coast, made a lifelong yearning come true.

Although Bentwaters Air Force Base was closed in 1993, the area is now used as an industrial park and houses a Cold War museum. My father’s first assignment in the Air Force took him and my mother far from their West Virginia roots. They settled in a tiny town of Bromeswell, which is now has over 300 residents. Here’s the story of my day at “home”…

First, I booked a night in a thatched-roof cottage B&B. We drove in the night down two-lane roads that were big enough for one car! Jim should receive an award for navigating the rental (steering wheel on the right side), driving on the left side of the road, AND while avoiding the hedgerows. And pheasants. And oncoming vehicles. It didn’t help that the B&B doesn’t have a house number, so it can’t be pinpointed on GPS. We knew the place was down the road from the White Horse pub. Unfortunately, we didn’t know there was a White Horse Inn in the neighboring village. Needless to say, we were lost. Fortunately, the B&B host got us heading in the right direction! Here are some photos of the cottage.

After a bite at the pub, where we were welcomed by local families gathering for dinner and a pint before Christmas, Jim rested up for even more driving down impossibly thin and curvy lanes. The next morning was my big day!

We first drove to Ipswich, the town where my mother and father took me shopping in my pram. The town was a Roman settlement and has been “continuously occupied since the Saxon period”, making it the oldest town in England. We visited the art gallery, the historical museum, and walked along High Street and the shopping district. It was wonderful to hear the street musicians playing carols as we strolled along admiring the old architecture. 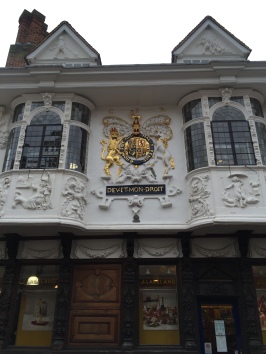 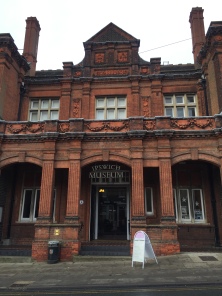 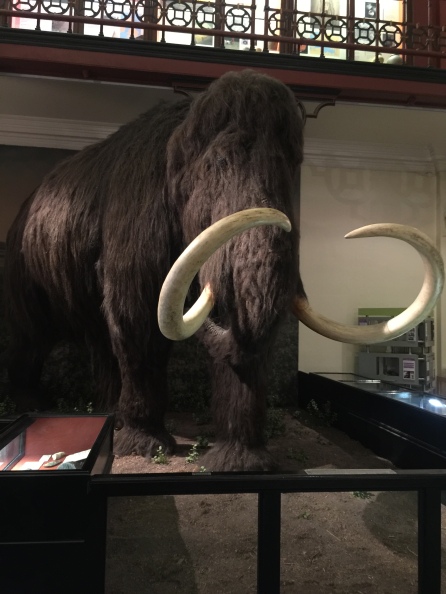 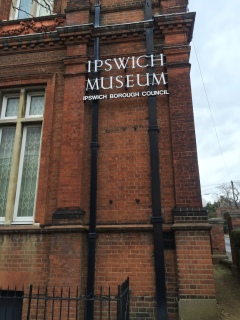 Next we drove into the countryside and found Bromeswell.

It only has a couple of streets, so I used the town’s church of St. Edmond as my GPS beacon. Good fortune was with us, as we met a lovely woman walking to the church for one last check before the Christmas Eve service. I told her of my mission to see my past and she brought us inside the sanctuary. It was a beautiful old chapel, and you could see the love in the handmade holly and ivy decorations. She had me sign the guestbook, noting my parents’ names, so she could see if any of the older parishioners remembered them. I was given the gift of a sketch of the church for my mother, along with its history. Jim and I made a donation, thanked her profusely for making our trip so meaningful, and then strolled down the lanes to take photos of the homes to share back in the States. 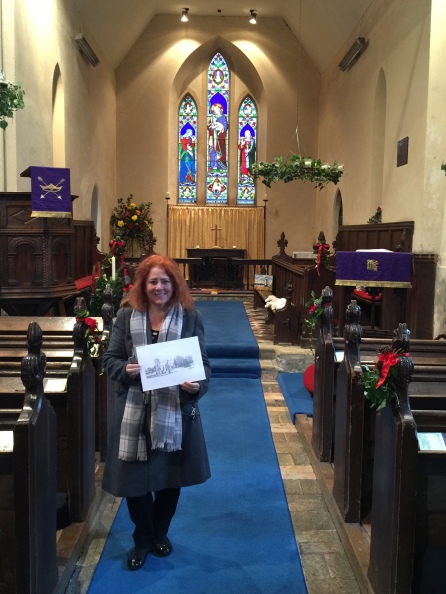 The last leg of the journey was to the area where Bentwaters AFB had been located, which is now a gated industrial park. When Jim and I explained to the security guard about how my father had once worked on the base and it was also the site of my birthplace, he let us drive up next to the flight line and to the control tower, with the promise we wouldn’t go into any of the buildings. Although the Cold War museum was closed for the winter, I was thrilled to get so close to where my father had worked! 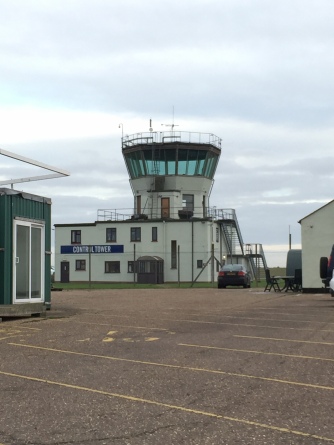 Thanks to the kindness of strangers and the intrepid driving of my husband, I was able to go home again. The day was filled with unexpected surprises, such as seeing the inside of the church and receiving the gift of the sketching, along with taking a drive down narrow lanes to discover the place where it all started for me at a former AFB in England.

4 thoughts on “Where I’m From”