One of my first memories of the word “mudlark” was from an Anne Perry novel. In these British mysteries showing the underbelly of the Victorian era, a mudlark is murdered near the Thames in the Thomas & Charlotte Pitt series. Later, in her Inspector William Monk series, Hester, his force-of-nature wife, brings home a mudlark boy.

The banks are strewn with bits of pottery, shells, and glass. The red color is from brick fragments and pieces.

So, what’s a mudlark? A person who made their living by searching for anything of value in the mud along the river banks at low tide. In London, the Thames. The Blackfriars Bridge is featured in a number of Perry’s novels, so when I saw the bridge sign and a set of stairs leading down to the bank, I had to go.

The stairs were steep and intimidating, so I didn’t take a photo until after I went back up again, so keep reading. I was surprised at how dry the banks were and how red.

When I first arrived, there was a mother and daughter searching for pieces of pottery, which they piled onto a flat chunk of concrete and left behind. An Italian couple were sunbathing. It was peaceful at the river level. Below you can catch a quick video I uploaded of the Thames at river level to get an idea of what I mean. 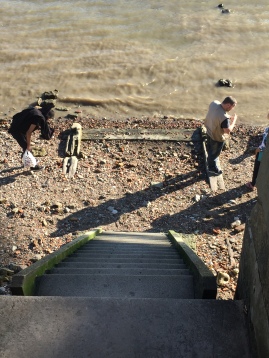 The steep stairs  (no railing!) leads to the bank. As I left, a few more people joined in the hunt.

Some of my treasures: crockery, pottery, shells, brick fragments, pieces of clay pipes, and one small bit of blue glass, for luck.

Here’s an article about a kayaker’s finds: http://www.mby.com/news/pipes-witches-jars-and-ww2-shells-12768

What to do if you find something of great historical value, such as a Roman coin: https://camguthrieblog.wordpress.com/2013/10/02/epilogue-river-thames-archeology/