The Fulbright organization in London arranged for us to tour Parliament and go into the House of Lords meeting room. 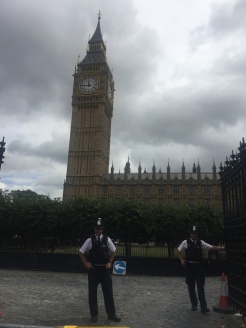 It wasn’t until we arrived I saw the tour was actually conducted by  Victor Akinbile, one of the members of the House of Lords. From Parliamentary news site:  “That this House applauds the Serjeant at Arms on his appointment of Victor Akinbile, the first ethnic minority representative from the office of the Serjeant at Arms to sit in the House of Commons chamber in parliamentary history; and supports further measures to increase diversity in House of Commons staff, whilst continuing to hire on merit, to reflect the multiculturalism of the UK.”

He told us about his appointment, which was primarily due to his community service and activism. In addition, he explained how he takes his position very seriously and works diligently to read up on all of the matters before the House of Commons, whom they advise. The House of Commons representatives are elected and make legal and financial decisions. The House of Lords advices and counsels the others, but does not enact laws. For more information, read here. The Prime Minister has great power, much more than the U.S. President, which was under consideration when the Founding Fathers first drafted the Constitution and government of the United States. While we were walking Lord Akinbile asked me what I was researching whilst in England. When I told him I was looking into how the U.K. educates traditionally underserved populations in the U.S., such as children of poverty and underrepresented minorities, he said, “Oh, I can answer that for you.” I waited. He asked, “Are you ready?” I told him I was and poised my pen on my paper. “They don’t!” His laugh boomed and bounced off the marble walls and steps. “Did you get that?” Later, he added, “And it’s about to get worse.”

The photos below: A stained glass window in the entry hall of Parliament (top left) and one of the many marble statues (bottom left). The ceiling in the great entry hall needed to be able to hold much weight and breadth. Since the U.K. was know for its great naval fleet, they designed the ceiling like an upside down ship hull. (middle) The long hallway leading to the House of Lords meeting room. As the government grows, they are outgrowing this historical building and will someday need to relocate. 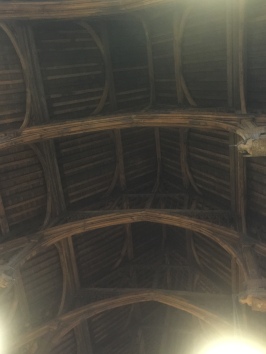 The roof in the Parliament Entry Hall 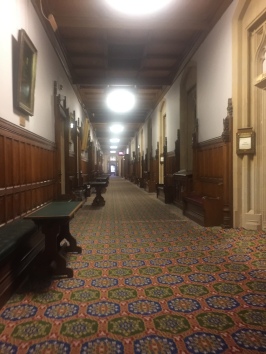 Hallway leading to the House of Lords meeting room

Another one of the highlights of the day was meeting The Baroness Andrews OBE (Elizabeth Kay Andrews), who is the Deputy Chairman of Committees and part of the Labour party. She explained how the House of Lords reads up on all of the materials in order to advise the House of Commons. Fortunately, I was able to sit next to her in the meeting room. In front of her was an extremely thick booklet: How to Exit from the EU

When she learned of my research topic, she told me, “Wait until you see what Theresa May is announcing later today about grammar schools. You’ve definitely come at the right time.” (Later that evening, I discovered Prime Minister May had made a quite controversial stand regarding the implementation of new grammar schools, which critics claim will set the country back to the 1950s and lead to greater segregation. This article, from The Guardian, uses educational studies to disprove Theresa May’s claims.

Oh, this picture? Just me hanging out with the Baroness and David Pinto-Duschinsky. 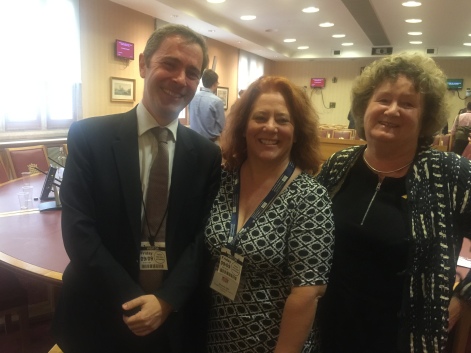 Mr. David Pinto-Duschinsky is an advisor to the House of Lords and a trustee for St. Giles trust. According to his Linkedin profile, he is a  “Member of top leadership of SCB’s Africa business, reporting directly to Africa CEO and sitting on bank’s Africa Management Committee. SCB is one of Africa’s largest banks…”  Mr. Pinto-Duschinsky gave an amazing talk to the Fulbright recipients (Scholars, Distinguished Teachers, and Visiting Professors), which will be featured in a future blog post.